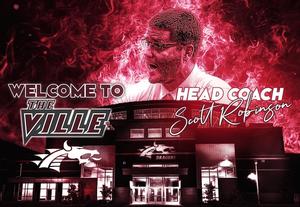 On Thursday, Collierville High School announced the school has hired Scott Robinson as the next boys baskeball coach for the Dragons. Robinson, a native of Danville, Indiana, played collegiately at Crichton College before joining the basketball support staff at The University of Memphis. He also was the head coach at Victory University and most recently the Head Coach at All Saints Academy in Winter Haven, Florida. He replaces Jonathan Mooneyham.

“We are excited to have Scott Robinson join the CHS Dragon Family. Coach Robinson came highly recommended,”  Roger Jones, Collierville High School principal, said in the release.  “With his experiences as a player and as a staff member under John Calipari and Josh Pastner, I am confident that Coach Robinson will have a profound impact on our student athletes and the CHS basketball program as a whole.”

Following his time with the Memphis basketball program, Robinson was hired at Victory University (formerly Crichton College) as athletic director and head coach from 2010-2014.  He led Victory to an 82-47 record before the University closed. Robinson spent the last four years as the Head Basketball Coach at All Saints Academy – a preparatory school in Winter Haven, Florida.  His teams compiled a 76-30 record during that tenure.

“I’m truly excited to have the opportunity to get back to the Memphis area and become the head boys basketball coach at Collierville High School,” Robinson said.  “This city has a special place in my heart.”

“My vision for this program is to compete at the highest level while making an impact in the Collierville community,” Robinson said. “We have the resources here to be successful and I’m ready to build a culture that the community will take great pride in.”