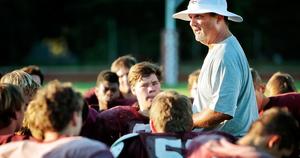 Collierville High School Head Football Coach, Mike O’Neill, announced he is stepping down from the position. O’Neill just completed his seventh season at the helm. The Dragons finished the 2018 season 5-6, losing to Whitehaven in the first round of the playoffs. During his tenure, the Dragons compiled a 40-38 record.
“Coach O’Neill has consistently emphasized character, integrity, & loyalty during his tenure and we are truly thankful for his leadership,” Collierville High School Principal, Chip Blanchard, said.
Coach O’Neill was named the 2017 Region 7-6A Coach of the Year. He received the Mario Reed Courage Award and was named the 2018 Collierville Man of the Year. Numerous players have moved on to play at the college and professional level, including Hunter Bradley of the Green Bay Packers.
“We are grateful for the work Coach O’Neill has done with our football program and for the positive impact he has made on his players and this community,” Collierville Schools Athletic Director, Jeff Curtis, said.
Prior to being named Head Football Coach for the Dragons in 2012, O’Neill served as the Defensivie Coordinator and Strength Coach from 2010-2011. He spent nine seasons as an assistant coach at Christian Brothers High School, including six as their defensive coordinator. He will continue to teach Business Education courses at Collierville High School.
Published December 20, 2018 Print